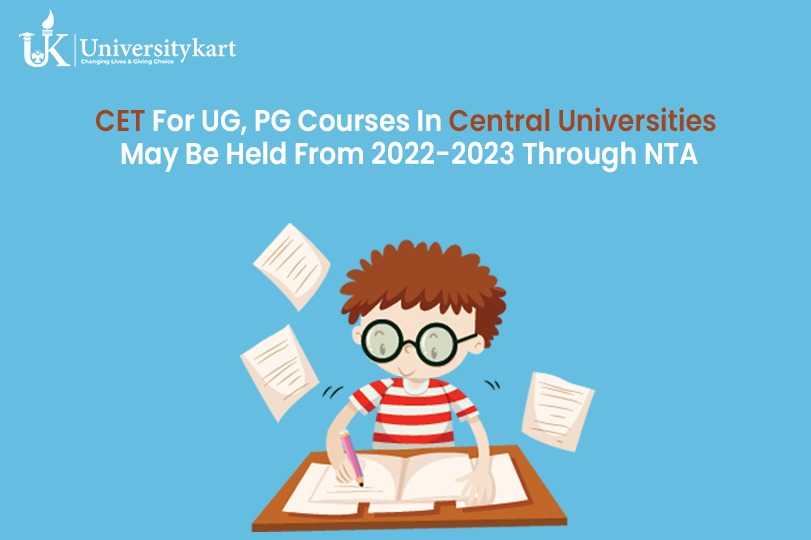 The University Grants Commission (UGC) has also declared that in order to be admitted into the PhD program, the NET score must be considered, whenever possible.

It is expected that the Common Entrance Test (CET) for postgraduate and undergraduate programs at central universities could be held beginning in the academic session 2022-2023 via the National Testing Agency (NTA) as per the UGC. The University Grants Commission (UGC) has also announced that in order to be admitted into the PhD program, NET scores should be considered if it is feasible.

"Accordingly to the UGC, all central universities are required to adopt appropriate measures in preparation for taking the Common Entrance Test from the academic session 2022-2023. The tests will be held in a minimum of 13 languages, where the NTA already conducts JEE and NEET tests," the UGC said in a letter sent to vice-chancellors at all universities.

"The Common Entrance Test may also be adopted by willing state or private universities, or deemed by the commission to be university," this commission noted.

It is believed that the National Education Policy (NEP) in 2020 had suggested the CET for all universities through the NTA that will function as an expert, top-quality and independent testing agency that will offer top-quality general aptitude tests and specialized common tests in sciences humanities, humanities, languages vocational and arts subjects in higher educational institutions.

A committee was established to study the issue and recommend the appropriate procedures to conduct the test at central universities.

"The committee conducted numerous discussions on the specifics of running the CET. Following that, a conference was scheduled with vice-chancellors from all central universities on the 21st of November in order to review the findings of the panel" the report said.

The Ministry of Education had earlier declared that admissions to universities will be based on an entrance test beginning in 2021's academic year but the program was not able to take off due to the difficulties posed by COVID-19.