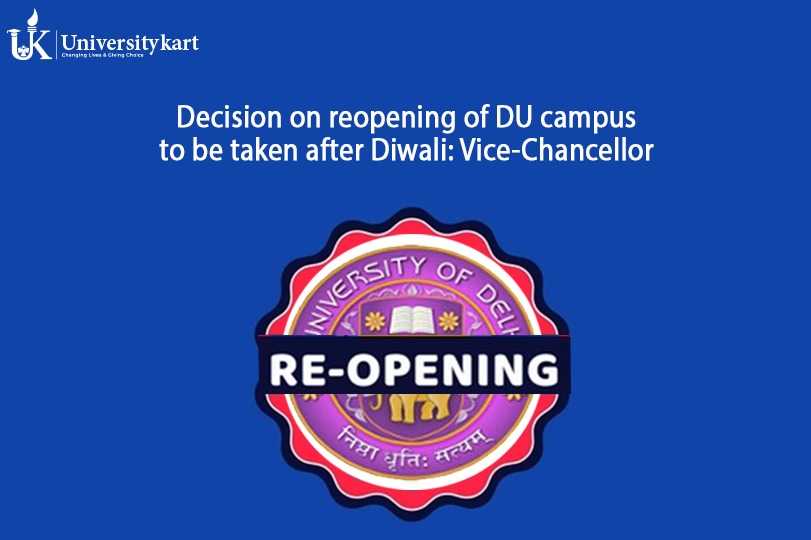 A final decision to reopen Delhi colleges gradually in a phased manner would be taken within this week. Welcoming the standard operating procedures (SOP) issued by the Delhi Disaster Management Authority (DDMA), Delhi University Vice-Chancellor on Wednesday said “it helped us in re-opening the University." A high-level meeting of the university's authorities was convened to discuss the systematic reopening of colleges.

DU's vice-chancellor PC Joshi told ANI, said the varsity, which has students from across the country and even outside India, is looking into various options. "We'll have to contemplate on how they will be included. All those things have to be considered," the VC said.

"We want to reopen soon, but we don't want to take a decision in haste. That might adversely affect students. I think we'll first allow third-year students and then further extend it when it works out well," Joshi said.

As per the advisory, educational institutes are allowed to function at only 50 percent capacity.

"We do not want to regret it (our decision to reopen) in the future and welcome the third wave. So systematically, keeping in mind the interest of students, we are slowly going to open the university and get back to offline mode of teaching," he said.

The VC also informed that a final decision on phased the reopening would be taken in the next five to six days as the university has to plan on how to accommodate students from different states in the hostels. 'Everything needs to be considered,' he said.

Further, he said that the university would ensure that the students who plan to attend the offline mode of classes are vaccinated, and also informed that the vaccination of the DU teachers is almost complete.

Meanwhile, the University Grants Commission (UGC) has asked vice-chancellors of all varsities to prepare a database of international students studying in their institutions.

The details have been sought by September 15.

"Ministry of education, the government of India has directed that a database of the information with regard to all international students studying in higher educational institutions (HEls) in India including the details of alumni needs to be created urgently," the letter written on August 31 read.

"Hence, all the universities are requested to provide the data of students from the graduate level onwards in the attached format via e-mail to ugcic2@gmail.com positively by September 15, 2021," the letter said.