Every year that a person is educated boosts a person's earnings by 6.7% in India 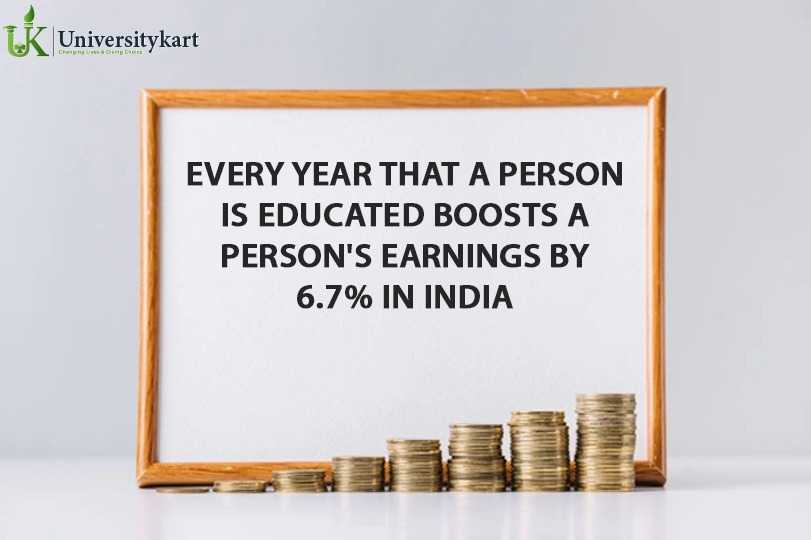 Every year of higher education results in an 8.6 percent increase in women's monthly earnings and for males, this figure is 6.1 percent.

Each year of schooling in India can boost a person's earnings by approximately 6.7 percent according to a recent study that found this increase is more for girls than boys. The study was conducted by the NGO Population Foundation of India, about the reasons why the government has to invest in the young's health well-being, education and overall wellbeing.

Based on an analysis on secondary information, they has been found that each year of schooling in India can boost a person's income by around 6.7 percent.

"This return is higher for girls than boys. Each additional year of education yields an 8.6 per cent increase in women's monthly wages, while for men the number stands at 6.1 per cent," the report said.

The study also showed that each rupee spent on the education of children will bring an economic gain of between 4.5 to 8.2 in terms of the future earnings for each person the study said.

The study puts the total cost for establishing proper mental health services for adolescents at around Rs 8,134 crore in 6 years. Based on the study that another $2745 crore is needed each year to pay for expenses of treatment.

It estimates that the cost of giving iron and folic acid tablets to school-going adolescents and girls, as well as out-of-school girls will cost around three thousand crore annually.

Concerning mental health problems faced by adolescents the PM's EAC chairman Bibek Debroy said there was an inordinate lack of information because the majority of instances aren't reported because of the stigma associated with these issues. Debroy also spoke about the urgent need to act in order to make the most of India's demographic dividend.

"Beyond 2035, or thereabouts, India will begin to age. Even more important is that we get our policies on these people who are entering the labor market right," said Debroy, who unveiled the study on Monday.

Poonam Muttreja who is the director-general of the Population Foundation of India, highlighted the necessity of collaborative actions among various branches of the government as well as civil society groups to aid in the development of adolescents.