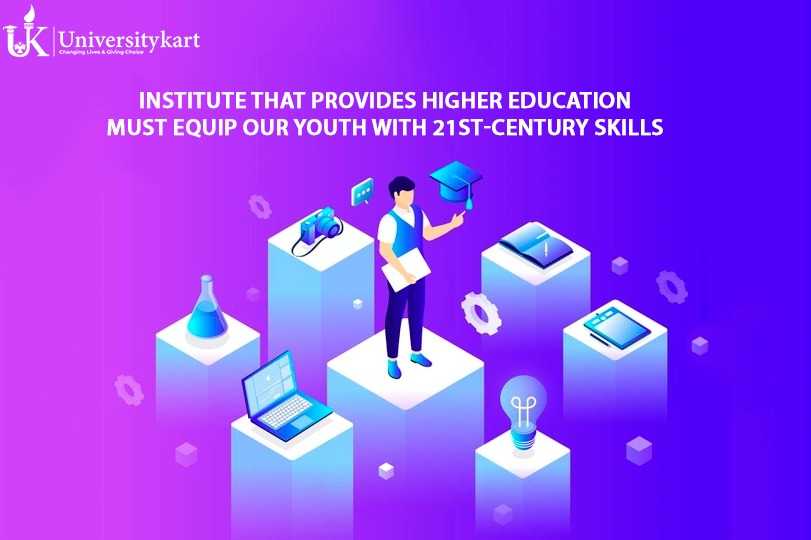 Vice-President M Venkaiah Naidu on Monday demanded that higher education institutions equip students with 21st century capabilities, pointing out that the fourth industrial revolution is at our doorstep and India should not miss this chance.

Bengaluru: Vice President M Venkaiah Naidu on Monday demanded that higher education institutions provide students with 21st century skills. noted that the fourth industrial revolution is coming to our doorstep and India can't afford to ignore this chance. Naidu also demanded the application of the National Education Policy in "letter and spirit."

"Today, the 4th industrial revolution is knocking at our door and it is driven by the knowledge economy and cutting-edge technological innovations. We cannot afford to miss this opportunity and our higher education institutions must equip our youth with 21st-century skills," Naidu stated.

In his address to the 6th Convocation of PES University in the city, President said the NEP-2020 policy is designed to transform and shift the higher education institutions of the country in the direction of the challenges of the new knowledge economy. "The new education policy is a well-documented, well researched and well thought of policy document, which has been presented to the country after a long, detailed discussion with all the stakeholders, and every university and educational institution, state and central government institutions, should seriously and truthfully implement the policy in letter and spirit," he added.

The Vice President stated that there is a pressing need to align our classrooms at universities with the latest global trends, including 5G-based technology that can be used across a variety of fields like agriculture, medical administration, commerce, as well as industrial and business management.

Noting that two satellites were constructed and launched by students and faculty at PES University in association with DRDO and ISRO He said that the government has implemented radical reforms to the space industry aimed at increasing participation of the private sector in space-related activities. "I would urge our private institutions and universities to make the best use of this opportunity and to work towards making India self-reliant and technologically advanced in the space sector," he said.

Additionally, Drone technologies are an additional emerging technology that will bring immense advantages to nearly all sectors of the economy, including transportation, agriculture, surveillance defense, defence, and law enforcement. Vice President noted that the drone industry is anticipated to create over five lakh jobs over within the next 3 years. India due to its advantages in the fields of innovation, IT and low-cost engineering is a good candidate for becoming a drone hub in the world over the next decade.

"We must focus our attention on creating skilled manpower for this sector .... In fact, all our higher education institutions and universities should be alive to national needs and they must review and align their existing courses to the emerging global trends or start new courses in tune with them," said the professor. stated.

In the 21st century, the global economy is dominated by knowledge-related activities, he said, adding that India aims to become a multi-trillion-dollar economy by 2050 and NEP-2020 sets a target of at least 50 per cent of this to come from knowledge-related activities and skills. Technological universities play a unique function to play in the transformation of India into a powerhouse of knowledge.

The Vice President urged universities to place more emphasis on the possibility of implementing patents in the context of Intellectual Property rights (IPR) rather than academic patents in order to provide a boost to the industry and economy Vice President declared that India must immediately take a multidisciplinary approach to R&D and should also enhance links between industry and institutions to achieve better research results.

"I find that many technical books used by engineering students in India are published by foreign authors. It would be good if our learned academicians could promote knowledge economy by authoring books of global standards on contemporary themes. I say so because Indian authors can better contextualize the engineering course content with regard to Indian socio-economic conditions," he added. This would be beneficial to students who are young since they'll be able to understand and solve the various issues facing the rural population of India farmers, rural India and other groups that are disadvantaged in our society. added.

"We must also strive to create study material in Indian languages for the benefit of our students. We must promote Indian languages. I would like to see a day when all the technical courses including medicine are taught in the mother tongue of the student," said the doctor. added.

Naidu also demanded that the academic journals published in India to keep rights to copyright and ownership over knowledge created in the nation, which could be transferred to international journals where our research papers are published. He also emphasized that research that is socially relevant and technological advancements are the necessity of the moment Vice President Naidu said on their way to excellence, universities should also be able to address national-relevant and global questions."

In the recent past there are two issues that require global attention, namely. climate change, as well as sustainable development. National institutes and universities as well as technological universities have a responsibility to be involved in these issues that are globally regarded as priority," he added.